This is the process where pumps are used for pumping concrete to higher heights. The pumps are used because it is the only option to transport the concrete to certain heights where no other means can be used.  The technique has been around for more than fifty years. Where large amounts of concrete are needed, pumping is aided by the use of conveying pipes over considerable distances.

CC Concrete spoke with us and told us that pumping concrete is a specialized concrete service. Therefore it’s a company that provides only this service. Most concrete contractors don’t have concrete pumping heavy-duty trucks. 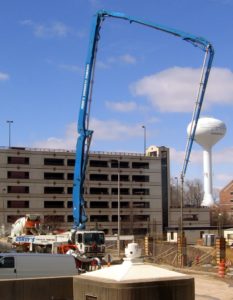 The mixer discharges the concrete into a hopper and feeds the pump and the convey pipes deliver the mixer.

Two types of pumps are used;

The pumping is aided by gravity and suctioning created by piston acting horizontally in a reciprocating motion. During this activity, the semi-rotary valves close and open alternatively. Under conducive conditions, 0.08 n/mm2 of suction pressure is developed when the cylinders pump. In order to achieve maximum suction pressure, the suction pipe and pumping cylinder should have corresponding diameters. The concrete should be allowed to flow freely on the suction pipe and any blockage caused by oversized aggregate should be prevented. Ideally, the blockage is prevented by the suction pipe having a diameter three times being larger than the aggregate.

The squeezing pump is a smaller and portable pump. The pumping has rotating blades which feed the concrete into a pipe connected to the pumping chamber. As a result, the vacuum produced by the pump ensures that the pipe retains a cylindrical shape to allow a continuous flow of the concrete mix. The pump has rotating rollers which gradually squeeze the flexible pipe. This action helps the concrete to be pushed to the delivery pipe.

The selection of a pump is determined by two parameters;

For jobs which require large outputs a much stronger pump should be used. For instance, a pump having an excess 120m3/h is known to be used. The necessary power of the drive unit will depend on the amount of concrete required and the pumping pressure. The pumping pressure (p) and delivery output are connected by the hydraulic output, H of the pump thus;

For some interesting residential concrete ideas, read our article about some concrete artwork that is very creative.